One of the shows I liked back in the ’80s was Silver Spoons with Ricky Schroder. It didn’t have an awesome talking car or a jacked dude that turned green if you made him mad. What it did have was a rich dude and his son living in a mansion and they had their own video game arcade… and Buck Rogers’ girl. I wanted that arcade way more than I ever wanted my mom’s car to talk. Thanks to Arcade 1Up we can all live out our “Silver Spoons” dreams. 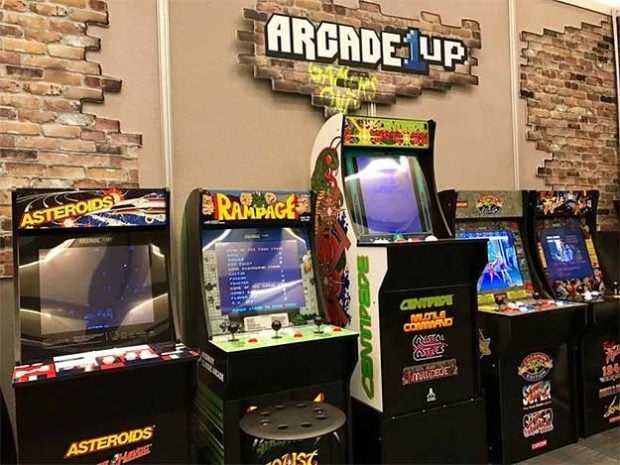 These 3/4-scale arcade cabinets that have the real arcade artwork, real arcade controls, and a 17-inch LCD inside the cabinet. Each measures 45.8″ x 23″ x 19″ making them shorter than the real deal, but they look great, and that design lets you have more machines in less space, and let you play the games seated or standing.

Plus, Each of the cabinets has multiple games inside. The Asteroids cabinet also has Tempest, Major Havoc, and Lunar Lander. The Rampage cabinet also packs Gauntlet, Joust, and Defender. The Centipede cabinet also has Missile Command, Crystal Castles, and Millipede. The Street Fighter II cabinet has both Champion, Turbo, and The New Challengers games. Another cabinet has Final Fight, Ghosts ‘N Goblins, Strider, and 1944: The Loop Master.

You must assemble them, but the pricing is so insane it’s hard to believe. GameSpot has them available for pre-order now for just $399 each. I was ready to throw my money at GameStop and then Walmart stepped up and offered pre-order on the Street Fighter 2, Centipede, and Asteroids cabinets for just $299 each. They’re expected to start shipping on September 25, 2018.