Growing up in the 1970s, one of my earliest memories of an electronic toy had to be the Speak & Spell. This tablet-sized device helped many of us improve our spelling and vocabulary, playing word games using an early speech synthesizer. I remember there being a myth that the voice used in the sound chip Texas Instruments used samples of Dan Rather’s voice, though if that were true, he must have been abducted by robots.

The Speak & Spell would later end up being circuit bent, and used by musicians ranging from Beck to Kraftwerk to Limp Bizkit. You can still pick up an old Speak & Spell on eBay, but if you’ve got the LEGO bricks sitting around, you could just build one of these instead. 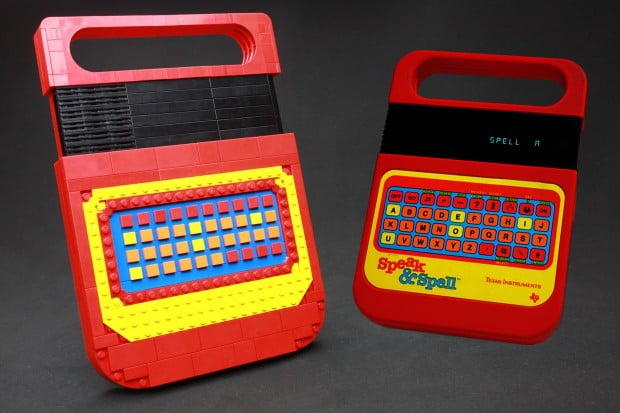 This awesome LEGO Speak & Spell was created by Jtheels, and is a perfect, albeit slightly large replica of the classic electronic toy. Be sure to poke around on Jtheels’ Flickr page, where he’s also got a LEGO Connect Four, a LEGO Mattel Football game, a LEGO Simon, a LEGO Merlin, and a working LEGO TossAcross among his various creations.