Amazon has been working on delivery by drone for a while now. And now the world’s largest online retailer has revealed its latest drone variant. The newly-revealed Amazon Prime Air delivery drone flies using a similar approach to VTOL aircraft, taking off and landing vertically, but orienting itself horizontally once airborne.

The new drone has thermal and depth cameras, sonar, and onboard computers with machine learning, to navigate and detect hazards. It has six degrees of freedom where most quadcopters have four, allowing it to be more stable and deal with high wind conditions. They upped the safety too, as the rotors are fully shrouded. These shrouds also double as wings in forward flight. 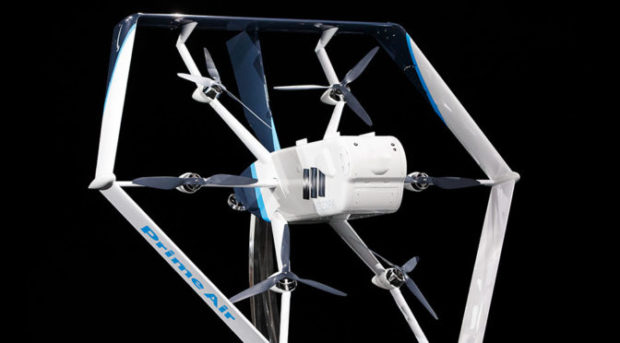 The goal is to produce a fully-electric drone that flies up to 15 miles, delivering packages under 5 pounds in just under 30 minutes. Interestingly, 75-90 percent of individually-purchased items fall within this weight limit, so most items can be shipped in this way. Of course, multiple items pose more of a challenge.

We don’t know when we will see this drone in action over our neightborhoods, but it brings Amazon a step closer to drone delivery. The company says we will see it in the “coming months.” Hopefully, we don’t have to wait very long for Amazon Prime drone delivery.