A group of LEGO builders recently built a giant 8-foot by 4-foot LEGO Han Solo in carbonite. Because why not? It was made to promote the 2020 release of LEGO Star Wars: The Skywalker Saga at the 2019 Electronic Entertainment Expo aka E3. 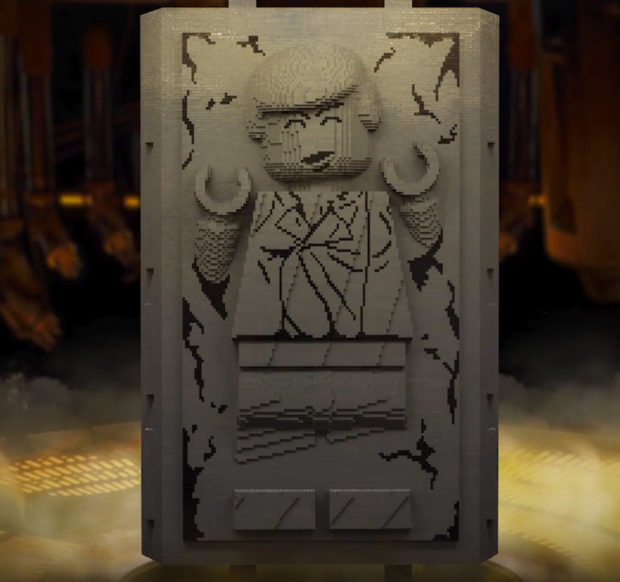 The sculpture was made from 49,735 individual LEGO pieces, took 38 hours to design, and 210 hours to build. Too bad I can’t hang this up in my palace. Then again, it’s also too bad I don’t have Slave Leia kneeling beside my throne either. But I do have my own Salacious Crumb sitting nearby and cackling every time I make a joke. Long story.

Save your strength! A large LEGO model of Han Solo in Carbonite is celebrating the reveal of the new LEGO Star Wars video game at E3 2019.

So far I haven’t heard any reports that a bounty hunter snuck into E3 at night and defrosted Minifig Solo, but I would be very disappointed if this didn’t happen. Maybe a Jedi like me should go rescue him. Nah, I’m not up for fighting a Rancor monster and battling on several sail barges. Let someone else handle it.