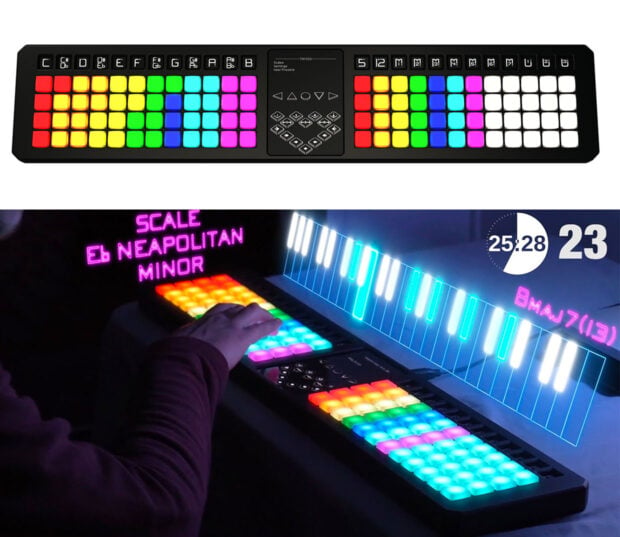 Most MIDI controllers mimic the appearance or at least the arrangement of notes in a piano. Irijule’s massive Theoryboard on the other hand features 96 LED-lit pads arranged in two columns with four rows each. The left column lets you play chords, while the right column lets you play melodies. The sheer number of pads means you have access to all 12 chromatic notes at once, letting you experiment while mostly guiding you into creating pleasing progressions and combinations.

Aside from the pads, the Theoryboard also has 24 buttons at the top for switching scales and a touch-sensitive OLED screen in the middle for toggling or adjusting various features. Here’s a review by YouTuber loopop:

Aside from loopop’s criticism about the quality of the pads and buttons, one commenter also mentioned that the Theoryboard doesn’t come with a manual, which is confounding for a device that is not only unorthodox but is supposedly geared towards beginners. Still, it’s undoubtedly an innovative and feature-rich controller that even veteran composers and producers can enjoy. You can pre-order the Theoryboard from Irijule for $699 (USD) as of this writing, which is a large discount from its eventual retail price of $1,199.