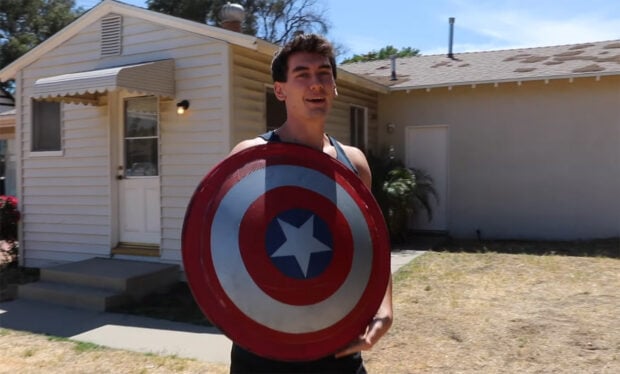 There are a thousand replicas and scale models of Captain America’s iconic shield, from action figure accessories and cheap children’s toys to full-on display pieces. But none of them actually work like Cap’s weapon – you can throw them, but that’s like playing catch with a cat. That thing isn’t coming back. Unless you’re YouTuber JLaservideo, who cobbled together a fairly simple but surprisingly effective life-size toy that can bounce back near you.

JLaservideo used fiberglass to create an elastic ring, allowing the shield to deform and bounce back. He then molded the rest of the shield out of carbon fiber to keep it light while still being durable. The key factor that JLaservideo figured out was that he couldn’t directly connect the carbon fiber plate to the fiberglass ring. That version wasn’t elastic enough, and the stress from being thrown on walls even just a few times would damage the plate. So he made a smaller carbon fiber plate, then used latex strips to connect the plate to the ring, creating a buffer between the two main pieces. He also wrapped the ring in carbon fiber for added durability.

Obviously, JLaservideo’s toy doesn’t bounce back perfectly, but it works well enough that you can mimic Cap’s double wall bounces with it and have to rush only a few steps to have the shield float back to your arms. Speaking of which, he also used small pieces of neodymium magnets to strap the shield to his wrist. If Disney can make a retractable lightsaber, I don’t see why they couldn’t make a more polished version of this toy.